When my writing professor changed the topic of our latest assignment from “On Loss” to “On Food” (“except, by the way, you should call your piece ‘unfood’”), I felt confused at first. “Unfood” isn’t even a word, I thought.

But, as I thought, I realized: experiencing loss and not experiencing food have a lot more in common than I first assumed.

This is Holy Week. This is Passover. I am, therefore, like many others around the world, “unfood-ed” at this time. For many Christians, including me, some kind of food (maybe chocolate or coffee) has been lost for forty days; for many Jews, leaven has been lost for seven. The Passover lamb was slain. The Christ was crucified. The bread was and is broken for us; the wine was and is poured out for us. So, to commemorate this sacrifice we sacrifice as well.

This year, I participated in WorldVision’s “ReLENTless Acts of Sacrifice,” a primarily web-based campaign to practice Lent not for the sake of Lent but for the sake of raising awareness about global injustices such as preventable hunger, disease, and poverty. Week by week, participants were challenged to sacrifice some of what surrounds us (e.g. comfortable furniture or electronics), what feeds us (food), what describes us (new clothes or accessories), what calls us (skills or hobbies), and what consumes us (TV shows, social media, other time-killers). I’ve now lived one week near an active drug corner in Camden, NJ, named America’s most dangerous city in 2009; one week without desserts; one week without makeup; one week without Facebook; and one week writing for and about others instead of for and about myself. Such “sacrifices” as makeup or Facebook may seem trivial, but in the twenty-first century I daresay such pleasures eat up our time, consume our thoughts, and define our beings.

What’s the point of all that sacrifice? What did I learn?

Well, first, I was reminded how much “unfood,” or how much hunger, exists in the world today. According to the United Nations Food and Agriculture Organization, for example, 13.1 percent of the world’s population, or 1 in 7 people, are undernourished. Around 17 percent have no home and 93.3 percent have no college degree. And, although Facebook is light years away from being a necessity, I often treat is as one, so I find it interesting to note that 93 percent have no Facebook profile. The food, shelters, knowledge, and hilarious “#firstworldproblems” that we take in every day are things that we also take for granted every day.

Second, I was reminded how much fairness and goodness could exist in the world today if we’d “hunger and thirst for righteousness” as Jesus put it. Or, as spoken word poet David Bowden puts it: 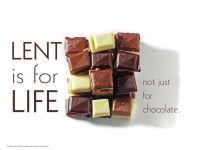 “Once, just once
I want my spirit to grumble in my gut so loudly
That it forces my knees to bend and my arm
To wave down God like a waiter
And order the largest portion of revelation on the menu
I want to hunger for a different kind of food
I want to salivate over generous portions of grace
Lick my lips at the smell of wisdom
Develop a wicked sweet tooth for truth”

For me, this is the point of voluntary “unfood” – to develop a sweet tooth for truth. Choosing to temporarily experience some “unfood” elicits compassion for those who regularly experience far greater “unfood,” which in turn might elicit action toward providing physical, mental, and emotional food for those who go without.