Plenty of blogs, sermons, and songs address what to do when you’re down in “the valley of the shadow of death” or up experiencing a “mountaintop moment.” But what about when faith goes flat? 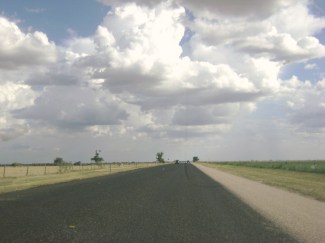 It surprises me that I’m saying that. And maybe it surprises you too.

Recently, I was discussing Thomas Kelly’s A Testament of Devotion with a group of InterVarsity students, and we came across Kelly’s description of a “flaming vision”:

“There is an infinite fountain of lifting power, pressing within us, luring us by dazzling visions, and we can only say, ‘The creative God comes into our souls.'”

The discussion leader asked if any of us had experienced a “flaming vision” of sorts. If we thought about it creatively, I’m sure we could each locate openings through which the creative God came into our souls in the lifting/pressing/dazzling way in which He came to Thomas Kelly. I tentatively told the discussion leader, however, that for a long time I haven’t had flaming and sudden visions…but perhaps flickering and steady visions.

Thomas Kelly would totally approve of flickering, we decided. Elsewhere in A Testament of Devotion, he writes:

“The vision fades. But holy and listening and alert obedience remains, as the core and kernel of a God-intoxicated life, as the abiding pattern of sober, workaday living.”

The vision fades. That’s the human condition. So, there’s no need to feel guilty if your “flaming vision” has dimmed. On the contrary, you need the energy and excitement of the vision to settle down so that you can set to work bringing the vision into fruition.

But holy and listening and alert obedience remains. According to Thomas Edison (lots of smart Thomas-es in this blog, it seems), “genius is 1% inspiration and 99% perspiration.” So, too, perhaps is faith. It’s 1% vision and 99% obedience. 100% holy.

And this obedience is the abiding pattern of sober, workaday living. In college, when I could change schedules every few months, this line wouldn’t have quite made sense. After college, though, life got a little more sober and a lot more workaday. Yet, lo and behold, that doesn’t mean boring. It means abiding.

When faith goes flat, God is abiding with us. By holy and listening and alert obedience, we abide with Him.

2 thoughts on “When Faith Goes Flat”