I know, I know. Easter blogs were supposed to happen a month ago.

It’s not that I procrastinated exactly (although maybe I did). It’s just that it’s still Easter. And that’s fascinating to me. As I’ve settled into the relatively-new-to-me rhythms of the Episcopal tradition perhaps more than ever this year, I’ve noticed the continuation of Eastertide in some little day-to-day ways.

There’s the old wooden sign at the front of the

church that keeps insisting it’s Easter even
though the now chocolate-less children and the Hallmark stores would beg to differ. Easter 1, Easter 2, 3, 4, 5, 6. It goes on and on, week by week, rolling in over us like the waves of an Easter tide (that’s what they call it after all: Eastertide).

There’s the “alleluia” that we say during the liturgy, nice and noticeable now after skipping the “alleluia” during the more somber season of Lent. Sometimes the prayer book even tells us to say “alleluia” two or three times — like when my housemates and I pray compline on Sunday nights and, laughing a little, they say alleluia-alleluia-alleluia as though it’s a tongue twister. It comes out more hurried than holy sometimes, but it makes me happy nonetheless.

Finally, the other day, the nice maintenance man 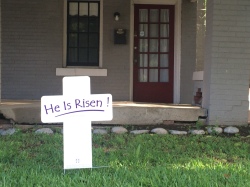 who mows our yard removed the cross from out front — the chipboard cross that was handed out at church during Holy Week to adorn our homes for a season — and placed it gently on the porch, out of the way of his yard work. I thought about bringing the cross inside that day, picked it up, noticed the soft earth appropriately sullying the bottom of the cross. But, that’s the moment when I started thinking about all this Easter season stuff, started thinking about how Christ is still risen and how maybe I should remember that and show the world that just a little longer, and stuck the cross right back into the ground.

He is still risen.

It’s not just that “he arose” in the past tense. It’s that “he is risen” in the present continuous tense (I think that’s the tense? God might be breaking grammar rules in this case. But I’ll forgive Him.) It’s the mystery of the faith that “Christ has died, Christ is risen, Christ will come again” — past, present, and future.

As for right now? We’re in the present. And Christ is absolutely present. Not just for one day but for many days, for every day, and for the everyday.