In Anne Marie Miller’s book Permission to Speak Freely, Miller describes a meeting with Jamie Tworkowski, founder of the mental health non-profit To Write Love On Her Arms. Over coffee, Tworkowski says something like this:

Let’s just say, in recent days, I’ve seen a whole lot of people — a metroplex of millions, in fact — get to carry each other.

Because on Thursday, July 7, I officiated the evening prayer liturgy at my church, mentioned then the names of Alton Sterling and Philando Castile, and afterward lit two candles there in the chapel. It was one small way of carrying their souls up to God, my prayers a little like the smoke rising from the candles.

That night, I could hear helicopters and sirens from my home about two miles from downtown Dallas, where a tragic shooting was unfolding. My housemates and I sat together on our couch and watched the news, dumbstruck, as the surreal events on the screen took place mere miles away. 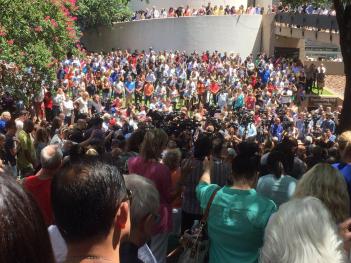 And, on Friday, July 8, as my whole city grieved, I headed back to the church for a semi-spontaneous noonday requiem, similar to the various services and vigils cropping up all over town. We sang hymns together, heard a homily together, cried with and communed with and carried each other.

A friend from far away called Friday and asked how I was doing, and I said: “There’s just a sense of heaviness sitting on my heart and over my city.”

I see this in the Bible when the apostle Paul exhorts us to “carry each other’s burdens, and in this way you will fulfill the law of Christ” (Galatians 6:2). Or when the gospels tell a story of people coming to Jesus, “bringing to him a paralytic carried by four men” — and when they can’t get to Jesus they keep on carrying the paralyzed fellow up to the roof, bust through the ceiling, and lower the dude down to Jesus.

I see this in the writing life when I’m working on writing a book-length memoir, which is a project I’ve been pursuing with some degree of diligence this summer. The thing is: memoirs are personal. The word “memoir” comes from the same roots as the word “memory,” after all. It’s memory after memory after memory — hard and humorous and hopefully insightful — all linked together at least somewhat logically by the end. But, until that pretty, paperback end comes (if it comes) the process is heavy. It’s more of my own stories than I’ve ever carried at one time, in one Word document. And, somehow, maybe because of Anne Miller and Jamie Tworkowski and Bono, I’ve decided to let people in my life carry these stories with me. Not because they have to, but because they get to.

When I finish drafting a chapter, it gets emailed to the person of my choice. Not for editing yet or even proofreading. Just for carrying. Chapter 2 goes to my priest, chapter 4 maybe to my mom, chapter 11 definitely to my therapist, and so on. That way, I’m not loading all the stories onto any one, single person, which could help me avoid dependency and help supporters avoid compassion fatigue. Moreover, this spreading-the-load creates community.

Story by story, chapter by chapter, when you have to hold the heavier things in your life, which sometimes you will, here’s what I hope: I hope you have a community, a Dallas, a church, a family. And in that community? I hope you get to carry each other.

“One love, one blood, one life, you got to do what you should.
One life with each other: sisters, brothers.
One life, but we’re not the same.
We get to carry each other, carry each other.
One, one.”
~ U2, “One”

1 thought on “Carry Each Other”